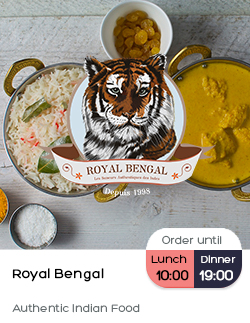 During the 19th century, many Odia-speaking cooks were employed in Bengal, which led to the transfer of several food items between the two regions. Bengali cuisine is the only traditionally developed multi-course tradition from the Indian subcontinent that is analogous in structure to the modern "service à la russe" style of French cuisine, with food served course-wise rather than all at once. Bengali cuisine differs according to regional tastes, such as the emphasis on the use of chilli pepper in the Chittagong district of Bangladesh.

The cuisine is known for subtle flavours with an emphasis on fish, meat, vegetables, lentils, and rice.

Royal Bengal is most probably the best ambassador of highly rated traditional Indian cuisine in Luxembourg. Every meal is cooked under the careful review of Maz Patwary, a long term partner of Foozo and the passionate owner of the restaurant. Taste the traditional Bengali cuisine in its highest form.
AllStarters & SidesMainDesserts